Welcome to the Second edition of the Fall Election Political Watch. We are going to talk about the candidates and talk about the latest polling results. Voting commences on September 2nd at 8pm (est) and concludes on Sept 6th at the same time. Having your voice heard is critical to our democracy so get out and vote, regardless of who you are voting for!

Kash Keller is not running for re-election in the Legislature. James Paxton and Josh Ford, both state representatives, are seeking election to the highest office in the state instead of re-election to the Legislature. Candidates Lee Li for Governor and Nikolai Stanislav for Representative have withdrawn from their respective election campaigns and won’t be included in this list or the final election ballot.

After multiple setbacks the Governor’s Debate went ahead on the 1st of September. Six important questions were asked touching upon multiple issues across the state. The debate can be found here [Debate Video Link]

Round Two of the Weazel News Election Polls

Firstly, on behalf of everyone at Weazel we thank everyone who took the time to fill out the political survey we conducted. It’s been a massive help to our election coverage.

The Governors race finally had it’s debate, and the results of the debate are not conclusive since it was so late in the race. We have only seen a small swing away from the Paxton Vote, however this could be to increase advertising by the Stiletto Campaign over the last couple of days. Paxton Voters are still more likely to vote for Becks and Endeavour as their first preference State Representative. Stiletto voters are more likely to vote for Caster and William Benning as their first preference. Both Paxton and Stiletto voters voted in an equal total for Mohn Nash. 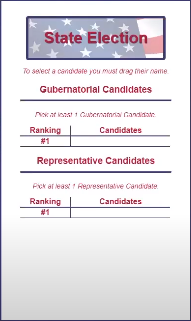 Voting begins at 8pm on the 2nd of September, at City Hall in Del Perro, GET OUT AND VOTE! Voting closes on September 6th at 8pm.

Voting in this state now works on the preferential system, in order to vote you will need to go to City hall and talk to one of the ballot collectors at the front desk, they will hand you a card, you will then need to drag names from the selection box in the preference you want them elected. You only need to select one candidate, or you could select all the candidates and put them in a preference order.

The card next to this is an example of what the card looks like, you just need to put names in the boxes and more ranks will appear.